Time to take a hike, don’t you think?

For some of us it’s near impossible to quell the cycling addiction, if even for just a day, and do something physical that doesn’t involve wheels.

A few weeks ago I was running hill intervals in Colman Park and got passed by Cascade Bicycle Club‘s “Wednesday’s Bends” group ride as they hammered up the hill.

Ride leader Jake Wimberger scolded me: “You need to be on your wheels, David!”

Jake is probably correct, but I have to say that although I’m not at my fastest on the bike this season, I feel like I’m in the best overall fitness of my life.

Since spring, my weekly fitness plan has gone like this:

With some core exercises almost every day except Tuesdays.

The best group rides in the Seattle area seem to be scheduled for Sundays, but in the interest of domestic harmony, hiking is the Sunday routine this year.

There are tons of spectacular and strenuous hikes within an hour of downtown Seattle. This year we’ve hit many of the classics like Mt. Si and Granite Mountain; some more than once. 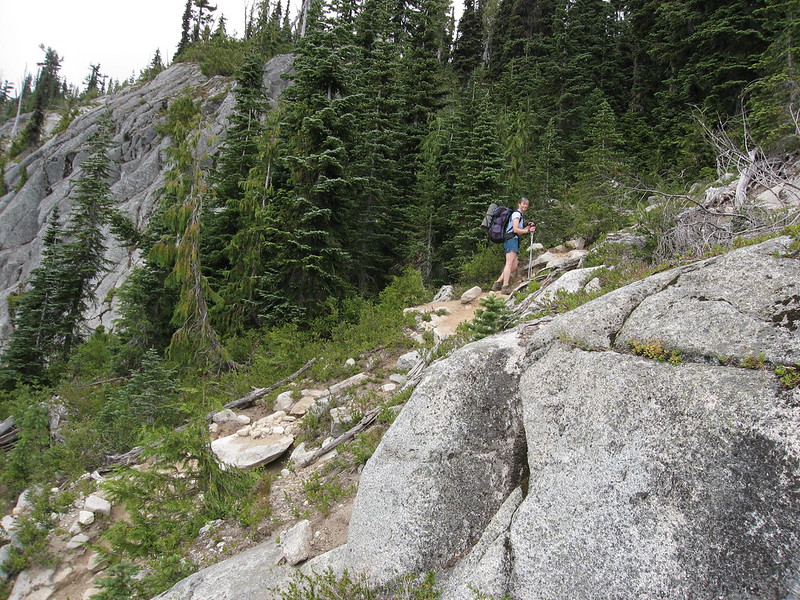 During the weekend of August 8-9 we finally got around to a full-blown overnight backpacking trip. We hadn’t done an overnight in a few years, and it took a few days to sort through gear, test the stove and water filter, and remember how to efficiently pack a backpack. 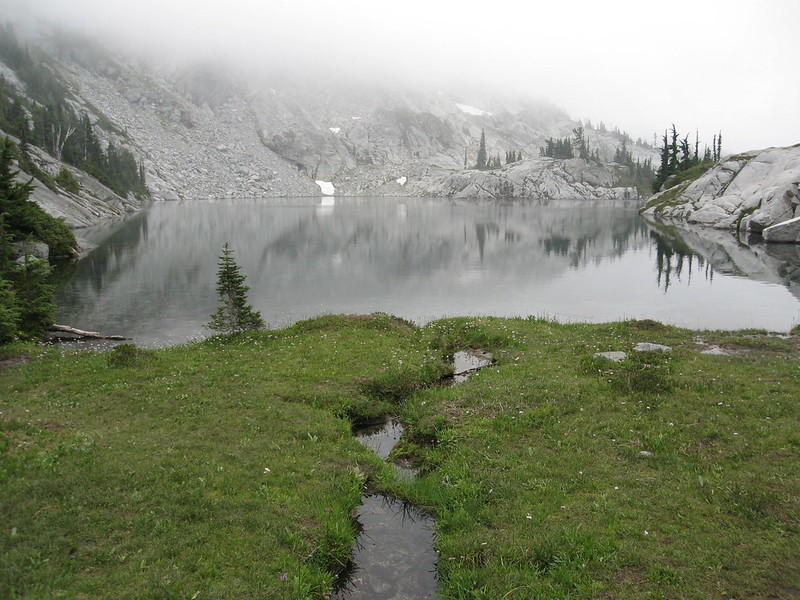 The destination was Tuck and Robin Lakes in the Alpine Lakes Wilderness north of Roslyn.

Tuck and Robin Lakes have a reputation as a smaller and unregulated version of the Enchantments, where we were fortunate to score a walk-up permit in 1999. Part of the appeal of the Enchantments is that overnight stays are regulated, which minimizes the crowds. We only saw one other party there during our 1999 hike. 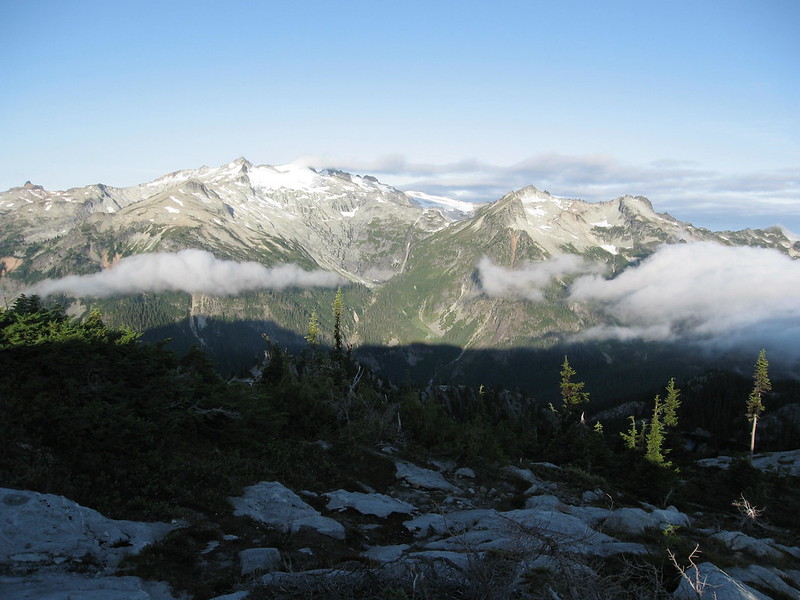 The drive to the trailhead is about 3 hours, with a solid hour on a dirt road. Along that road you pass many campsites with folks wearing the latest in camo fashion. At times it felt like we were entering an armed militia encampment whose members were ready to act on the latest anti-Obama conspiracy theory. 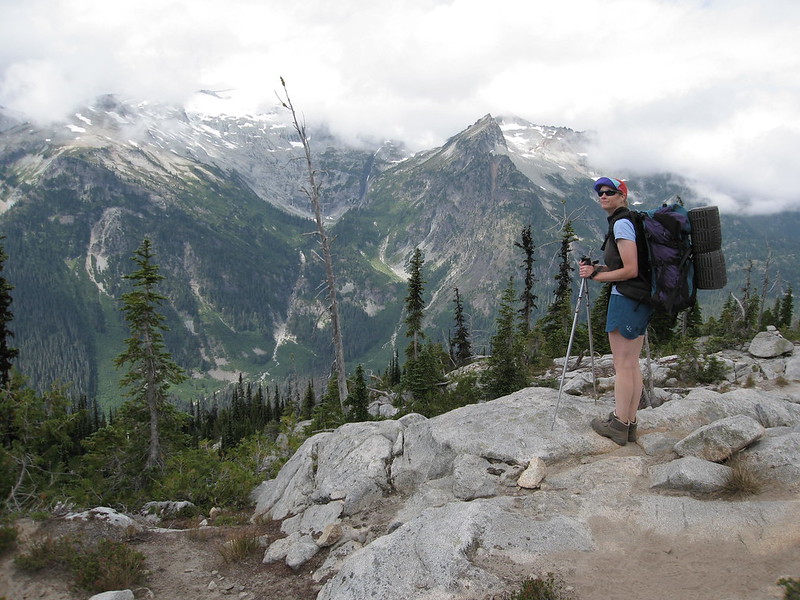 This hike is about 6.5 miles one-way. The first 3+ miles are relatively flat and pass by Hyas Lake, which looks to be a popular family destination.

As the main trail approaches Deception Pass you exit to a side trail that takes you skyward to Tuck Lake. After about 1/4 mile this trail gets quite steep.

As an added bonus, the stretch between Tuck Lake and Robin Lake has some route-finding difficulty. We met one party that got lost on the way up.

It was about what we expected.

When we got to upper Robin Lake, a dozen resident mountain goats (Oreamnos americanus) were there to greet us. Indeed, a few of them trailed us around like puppies as we looked for a suitable low-impact camp site.

As we learned when we visited the Enchantments, mountain goats have an appetite for human urine because it contains salts they crave. They were no doubt hanging around hoping for us to pee. 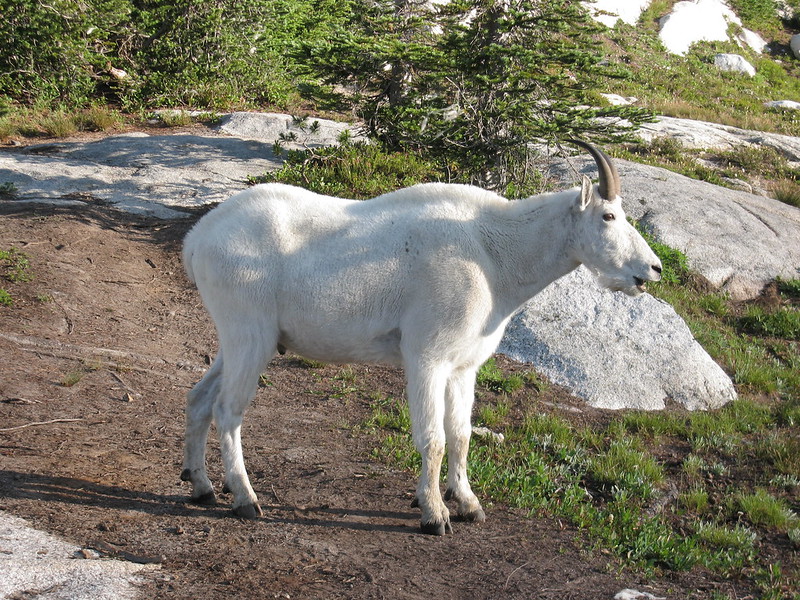 By the time we got to Robin Lake, it was socked in the fog of the marine air we had that weekend. During the hike in I fantasized about an afternoon skinny dip in Robin Lake, but it was too cold.

Plan B: We cuddled in our sleeping bags in the tent.

We woke to clear skies Sunday morning and had a clear view of Mt. Daniel to the west. After breakfast we cruised around the ridge above the Robin Lakes and got a good look at Trico Peak to the north of the lakes.

By mid-morning the cool marine air started to move in again and the fog lapping over the Cascade Crest reminded me of summer in Northern California where the hot inland air sucks the cool foggy marine air over the coastal hills. We packed up and headed out before we got too chilled.

It’s feasible to do this as a day hike, but it would be a long hard day, and you wouldn’t have enough time to hang out with the goats. 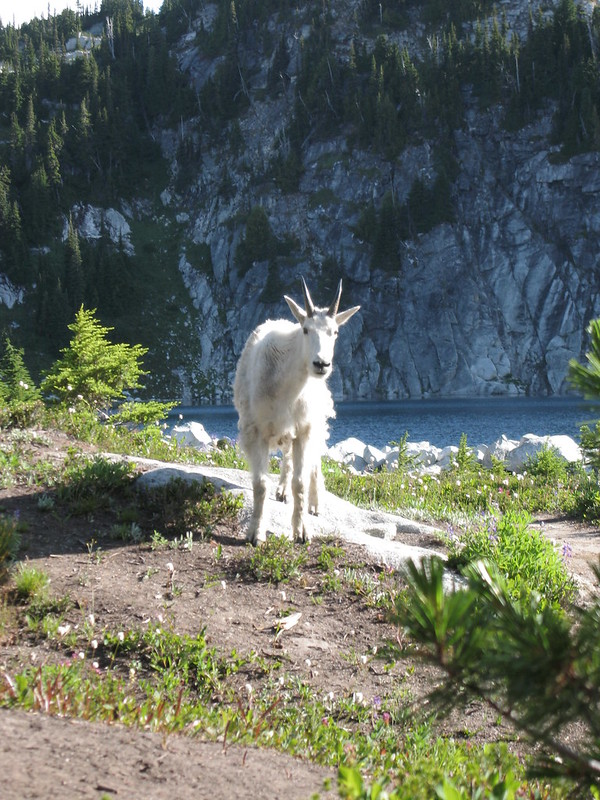