The emotional stress of the pandemic, combined with the nearly real-time video of the brutal, nonchalant murder of Mr Floyd has ignited a global movement of solidarity. Former officer Chauvin gave Trump’s reality TV show presidency a gruesome pre-GOP convention distraction from his administration’s bungling, flat-footed, amateurish, deceitful response to the coronavirus pandemic.

Sadly and embarrasingly, as many of us know well, systemic racism is more than evident in the recreational activities we love: cycling, running, hiking, skiing, climbing…

Where are the black and brown faces?

If systemic racism did not exist, we should expect roughly the same proportion of blacks to participate in these kinds of recreational activities as the white population does.

Where are our black and brown brothers and sisters in these sports?

Recreational sports are a luxury and privilege. As you dig in to this question you can start to understand how our sports are a great magnifying glass through which to view the inequities the US’ social and economic systems.

Ed Ewing and Doc Wilson see the events of the last two weeks as a carpe diem moment. I only heard about the ride by listening through to the end of last week’s Ron and Don podcast. Check it out:

Ed and Doc must have had to scramble to pull the ride together on short notice.

Ed is well-known as a long-time Seattle resident, activist, cyclist, and the founder of Cascade Bicycle Club‘s Major Taylor Project (MTP). MTP is dedicated to getting under-served youth on bikes. As Ed tells it, “getting these kids on bikes is a mind expanding experience.”

Indeed. I had the pleasure of interviewing some of the MTP kids during the 2019 Cyclocross season, and wearing muddy smiles their passion for cycling is infectious. 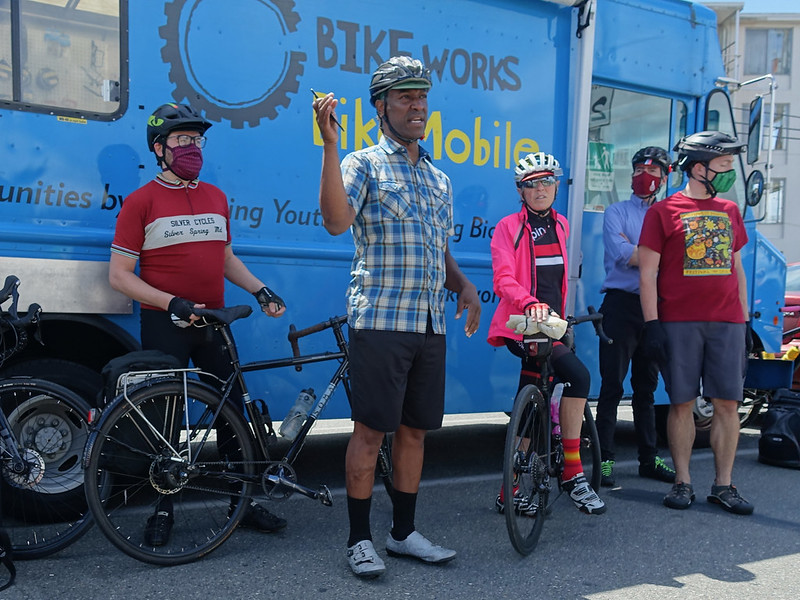 With a mutual love of cycling and connections with the cycling community, Ed and Doc hosted a “peace peloton” bike ride on Saturday. The route started at Alki Beach Park in West Seattle at finished at Jimi Hendrix Park in Seattle’s Central Area.

Doc put it this way:

“I wish to encourage the PNW’s recreational athlete community to examine how the behavior they are modeling in their networks influences positive change.” 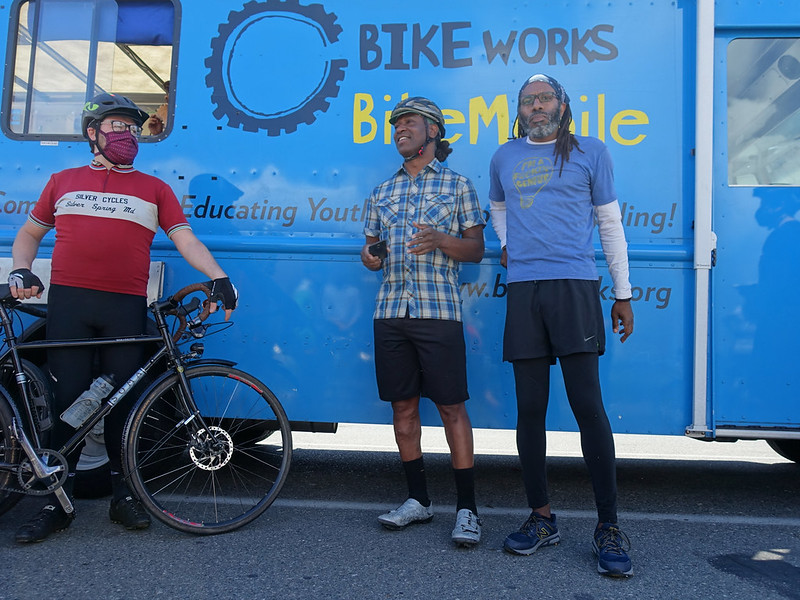 During the pre-ride briefing Doc introduced the ride’s rationale, and his hope that the ride will recur in one form or another in the weeks and months to come. His plan is to focus on economic reform and host a series of rides that start and finish at black-owned businesses. (This clip includes profanity.)

Ed gave an emotional introduction that got me crying. He grew up about six blocks from where George Floyd was murdered. His dad was a bicycle commuter, suit and tie and all, and Ed regularly cycled through that neighborhood with his dad. Ed’s message emphasized the importance of taking action:

“I don’t need a virtual hug and I don’t want to see your black square. I want you to take action.”

The number of participants was much greater than expected. Ed said he thought anywhere between 10 to 200 might show. About 300 participated.

Doc told me: “The response shattered my expectations. It’s hard to gauge crowd size for these types of events but, as cyclists kept rolling in, and supporters showed up with snacks, and children lined the streets with signs in support, I began to realize that we were in for something more than a casual cycling event.”

No surprise, most of the participants were white.

We completely underestimated the impact the group was going to have along the route. While there was no plan to “cork” the intersections to block traffic, it became a necessity. Fortunately most drivers were patient and honked and waved in support. I saw at least one police vehicle monitoring our parade. 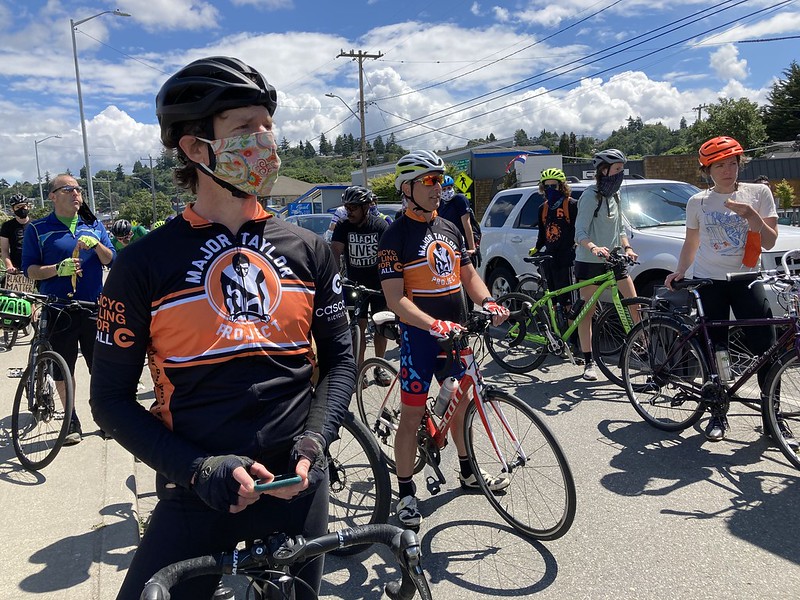 I anticipated the ride would have a mostly white crowd, which gave me an opportunity to practice one way I’ve been working with racism and implicit bias:

When I’m with friends or acquaintances I suggest: “Let’s have a conversation about our relationships with race.”

I’m comfortable facilitating conversations that can get heavy, and over the years I’ve honed an ability to solve the world’s problems during group bike rides. In this case, I try to stay focused on cultivating a conversation without an agenda. My intention is one of mutual discovery and understanding. Maybe both of us learn something new. 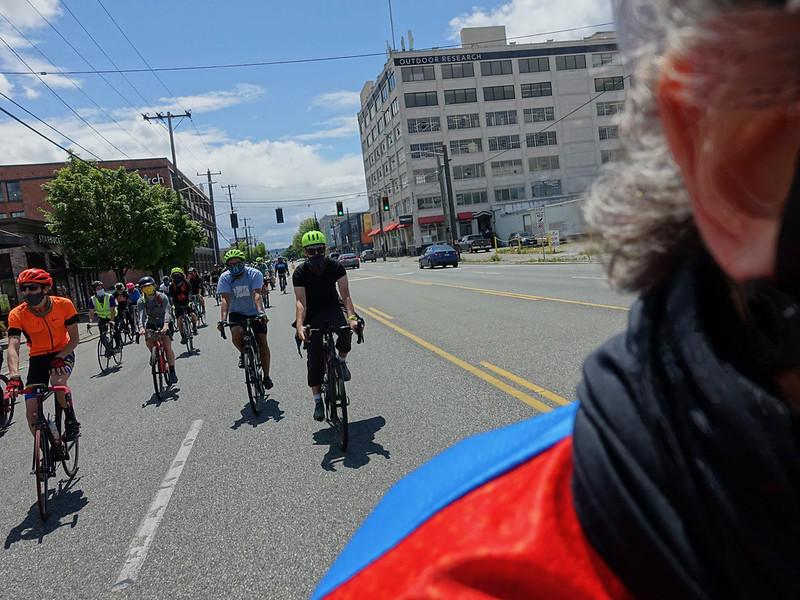 My approach is to try to ask open-ended questions like:

“Tell me about growing up. Did you have any friends of color in school? What did your parents and neighbors teach you about people of color?” And so on.

It’s a starting point that can go in a deeper direction. Maybe an approach like this can also work for you.

One bummer about the Peace Peloton, and something that is going to prevent me from future participation, is the pandemic. While most folks wore masks, and there was social distancing while we were in motion, being in a group of 10 or more feels a bit too risky to do on a regular basis at this point. 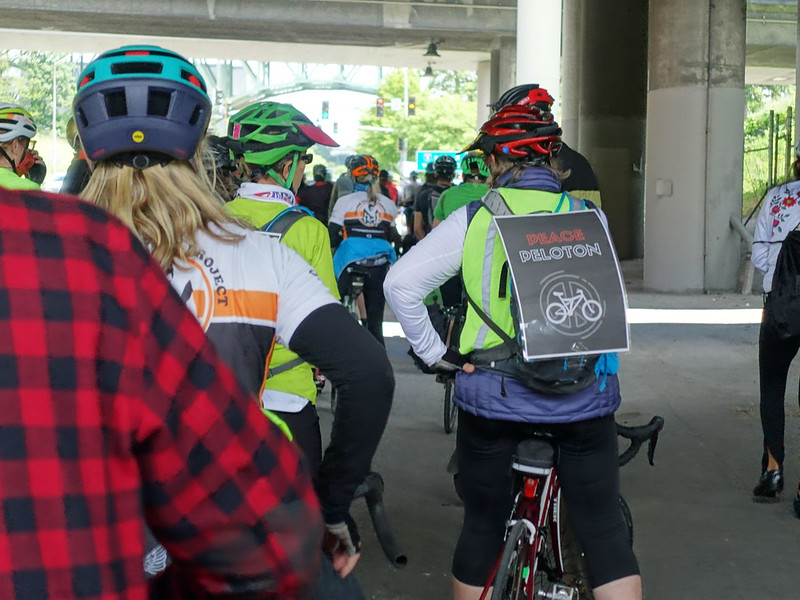 At the ride finish at Jimi Hendrix Park Augustine Cita, the Vice President of Operations at the Urban League of Metropolitan Seattle, briefly told us his story, which unfortunately included incarceration. Augustine urged the crowd to get involved with the Urban League.

While Ed’s talk at Alki was personal and emotional, his talk at Jimi Hendrix Park was directed and purposeful. (Sorry about the wind noise. This clip includes profanity.)

The mission of the Peace Peloton is to focus on economic reform for Black people. To make it happen the vision is to:

–Recruit a critical mass of mission-aligned demonstrators on bikes;
–Spread our message where humans gather;
–Take routes through historically significant Black neighborhoods, landmarks, and points of interest;
–Support Black owned-businesses at the start, along the way, and completion of each route

“This should be thought of as a demonstration that happens on bikes. In order to get the message out to as many ears and eyes possible, it’s important to safely map routes through neighborhoods where humans gather in mass.”

“The purpose of any demonstrations/protests is to bring awareness to a cause. The deliverables come about when that awareness is made actionable through the deliberate on the ground engagement with humans in the workplace, at parties, on ball fields, in faith communities. Humans tend to be encouraged by observing people who look like them model behavior that aligns with their values.”

Read the Melanin Base Camp Guide to Outdoor Allyship

75 Things White People Can Do for Racial Justice