Despite dreary, cold, wet Juneuary atmospheric conditions, about 200 activists joined Saturday’s Peace Peloton bike ride. The Peace Peloton rides are happening about every other week with a goal of raising awareness and inspiring actions that support economic reforms for Black people.

Saturday’s ride started at Central Cafe and Juice Bar, looped down to Seward Park, and finished at Fat’s Chicken and Waffles. The rides are intended to be relatively easy-going parades along the route. This week counterculture Dead Baby Bike Club provided “corking” services at the intersections to prevent automobiles from disrupting the event.

Peace Peloton Rides are hosted by Doc Wilson. His message this week was about access. 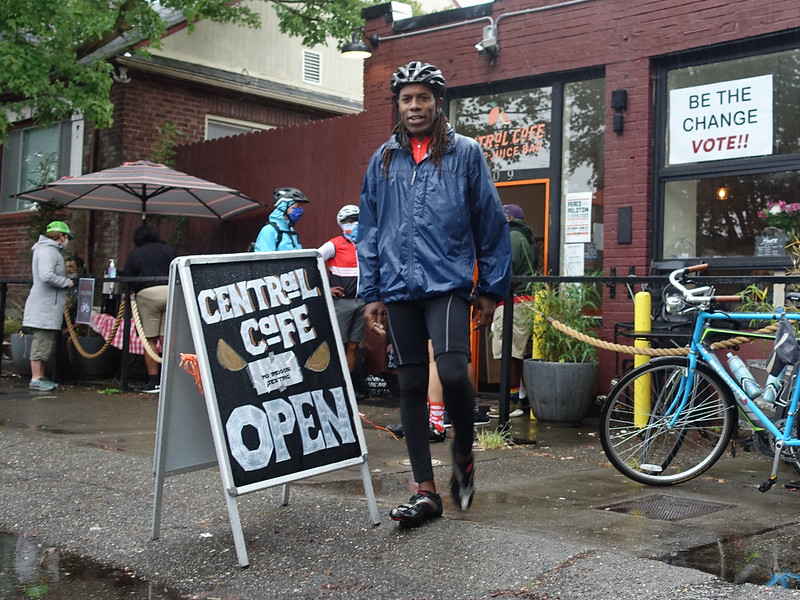 “The advantageous variable that separates the successful from the striving is access – access to education, finances, mentorship, and other resources that are held sacredly exclusive by and for the privileged.”

Given its success, the Peace Peloton is expanding its scope. Doc mentioned that they are in the process of establishing it as a non-profit, adding new cities, and developing programs like mentorships that will support Black entrepreneurship.

It’s apropos that the Peace Peloton has been focused in Seattle’s Central District (aka “the CD”), which is a case study in the economic disfranchisement of Black people. A recent story by Gene Demby of NPR’s Code Switch team had me thinking about the systemic impediments that have severely curtailed the accumulation of wealth for Black people.

“…it seems like common sense to say, look – there should be more investment in Black institutions and businesses. But maybe we should also be asking, is buying things, buying stuff, the most effective way to create or even redistribute wealth? I mean, the vast wealth gap between white people and Black people is the result of centuries of racist public policy. It wasn’t created by consumer spending. And so fixing this deep-seated problem is also a question of policy, not pocketbooks.”

Among those policies was the real estate lending practice known as redlining, which formally persisted in “liberal” Seattle and Washington state until 1977. The Seattle Municipal Archives describes redlining this way:

In July 1975, the Central Seattle Community Council Federation published a report, “Redlining and Disinvestment in Central Seattle: How the Banks are Destroying our Neighborhoods.” In the report, redlining was defined as “the practice by banks and other lending institutions of refusing home loans or requiring higher interest rates and larger down payments to otherwise credit worthy people because they happen to live in a certain area.” A related practice, “disinvestment,” was the policy of taking in savings deposits from residents of a redlined area and refusing to return the money, whether it be in the form of a home, business, or consumer loan, to the community that provided the money.

The CD, which has been known as Seattle’s “Black neighborhood,” was redlined. Redlining was an extension of the Jim Crow laws enacted after the ratification of the 13th Amendment, which abolished slavery in the United States.

As a response to redlining, Liberty Bank was established as Washington’s first Black-owned bank in 1968. The site of Liberty Bank at E. Union and 24th is now the Liberty Bank Building which provides affordable housing to 115 families.

At the start, the message from Bridgette Johnson, the owner of Central Cafe and Juice Bar, was: “millennials need to vote!” 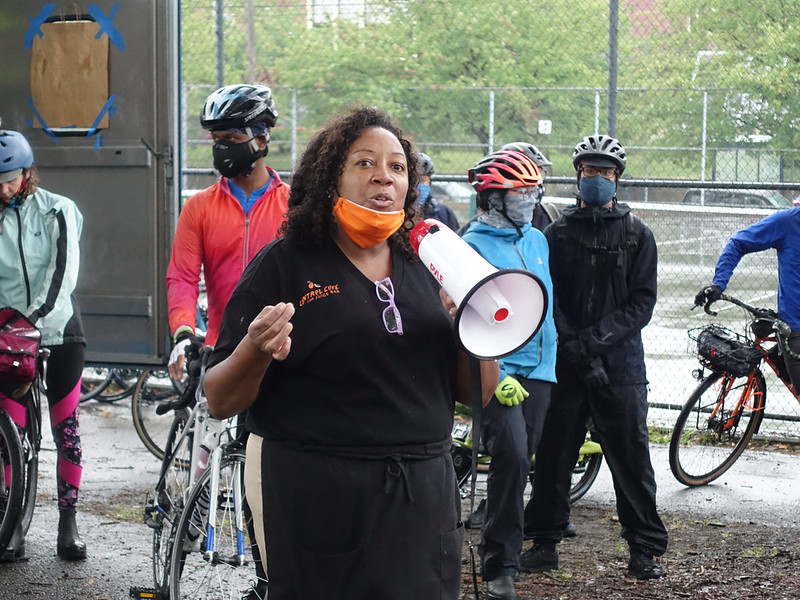 Healthcare executive John Vassall’s message at the start was an anecdote about recovering from a bike crash that broke his femur. He related that he was helped out by a few cycling buddies, just as allies of Black Lives Matter are helping out now. And he talked about how his broken femur is like the US’ broken relationship with Black Americans. “Just like with my broken femur, we as a society have to respond to the pain we are now experiencing before things get worse.”

“The effort to patronize black businesses is important. No business can be initiated without those initial purchases, and no business is sustainable without repeat customers and ongoing patronage.”

“But, supporting black businesses alone will not build wealth within our community. Wealth does not reside in consumer goods; it resides in capital formation and asset growth and preservation. Racism has denied black people and their businesses access to loans, real estate and other investments, and to the intellectual capital shared and leveraged among families, friends and business associates that have learned how to deftly navigate the financial system and have developed lasting, mutually beneficial and reciprocal business relationships.” 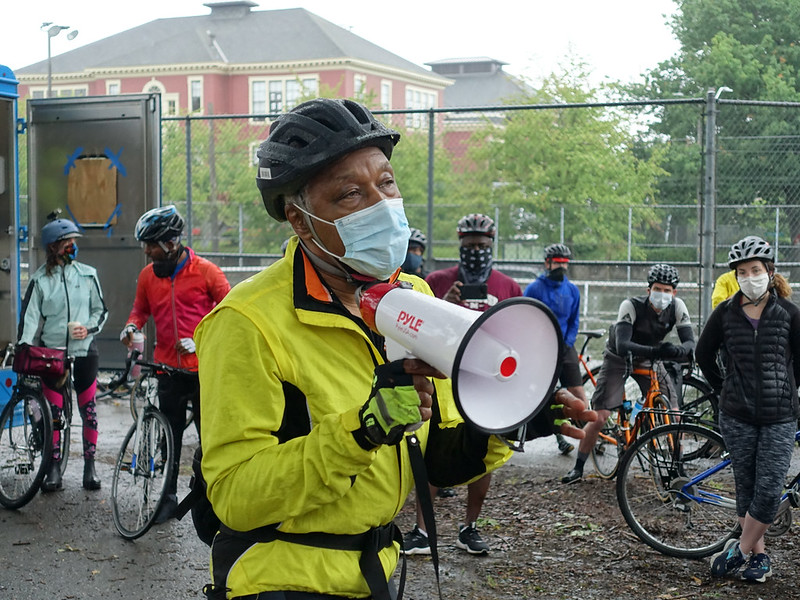 I chatted with John during the ride, and he related that he benefited greatly from two (white) college mentors who recognized his academic gifts and steered him to medical school, which in turn led to leadership roles at area hospitals and health care organizations.

Racial economic inequities have been a theme recently. Late last week I also got turned on to a WBUR interview with Angela Davis whose life work emphasizes the relationship between capitalism and racism:

“Before eliminating racism…we must eradicate racial capitalism — a term designed to ‘encourage people to think about the ways in which capitalism and racism are interlinked. There is no capitalism without racism.”

Read about the inaugural ride. Scroll to the bottom of the post for a list of Black Lives Matter resources. 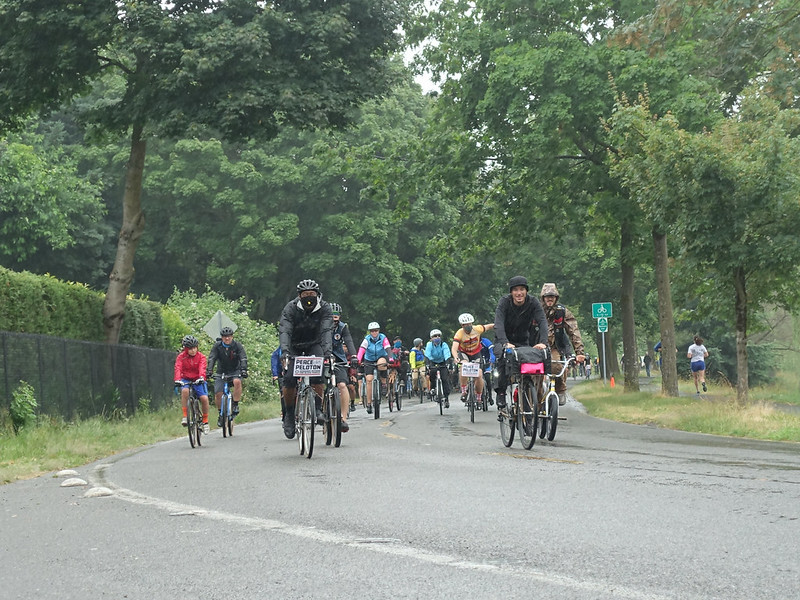