Home » Running » Sophia Liu: Olympic Hopeful ‘With a Little Help from Her Friends’

The women athletes profiled on Northwest in Motion have a common trajectory: They typically enter their respective sports in their mid to late-20s as the result of serendipity. Their first forays into athletic competition are usually the result of joining a race or event on a whim with the encouragement of a friend. To their surprise they win the event and discover previously unknown athleticism.

Runner/scientist Sophia Liu (Liu Ziyang) discovered her remarkable athleticism by accident: grad school mates encouraged her to try running “just for the fun of it,” after which she promptly won a marathon. To add to her “type A” cred, Sophia’s day job is as a research scientist at UW’s Marcinek Lab, which investigates the interaction between mitochondria and cell stress, and its effect on the pathology of chronic disease and aging. 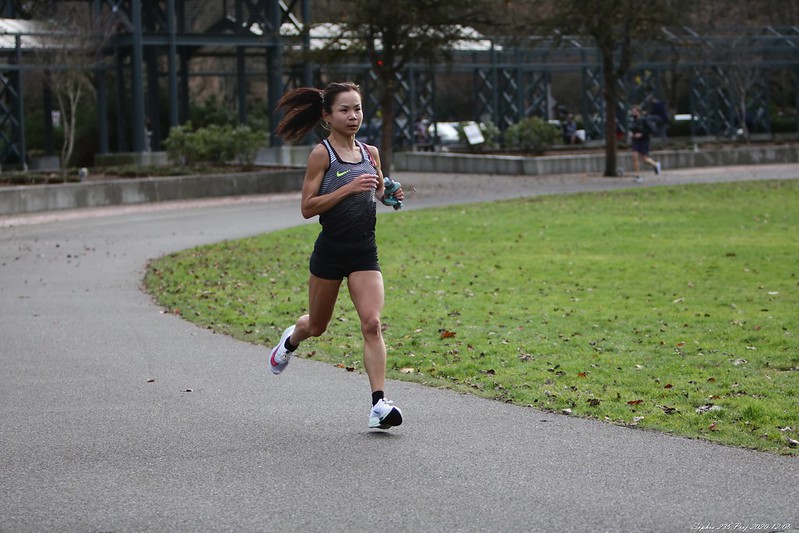 For the past few years, Sophia has been working on earning a highly-coveted spot for non-professionals on the Chinese Olympic Marathon team. To fulfill the qualification requirements, among other things, she raced in Beijing and Shanghai. At Beijing she ran a 2:43:10 which made her the top non-professional female, and the top competitor in the Chinese Athletics Association’s (CAA) “Run for Olympics” program. She then placed fifth at the 2019 Guangzhou International Marathon with a 2:40:30, which met the Olympic qualifying standard.

This program is intended to “encourage many runners to run for their best and attract more people to join the sport.” Under this program, non-professionals could become eligible to qualify for the Chinese Olympic Team through a ranking system, or by running a qualifying race under a qualifying standard (2:45 for women.)

Sophia says she made good use of the unplanned off-year: she recovered from a persistent injury, PRed in every distance from 5k to marathon, used the bike to limit the chance of re-injury, did a self-supported 90 mile, 10,000’ climbing ride around Mt Rainier, and ran a couple “time trial” events organized by friends and teammates. 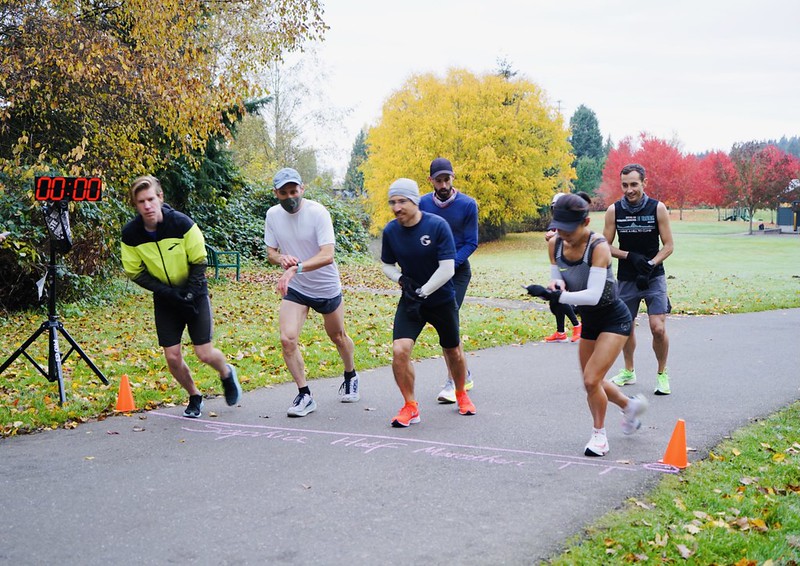 The CAA has contacted her to confirm that she’s staying prepared to race. Although getting to China may be difficult, the 2021 Chinese Marathon Trial is tentatively scheduled for March or April. To qualify for the Chinese team she’ll need to finish on the podium. Sophia is the only non-professional slated to compete in the Chinese Trial who has already met the Olympic qualifying standard.

How did you adjust your plans as 2020 unfolded and it became clear the Olympics would be postponed?

During Jan to March 2020 I was focused on the Chinese trials until early March. COVID hit China pretty hard and in March it became obvious that Chinese trial will be postponed. I took a short break (2 weeks)–low mileage, and also to recover from some shin splint issues that started early in 2020. 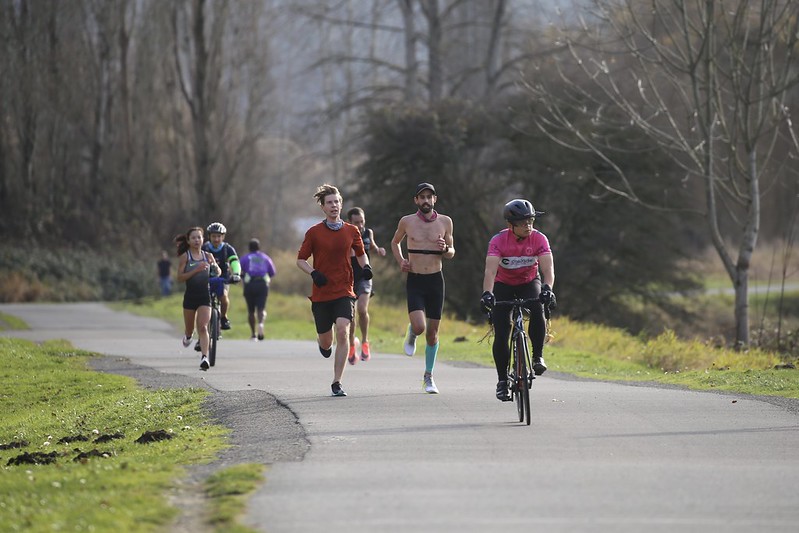 From March to April, as U.S. COVID cases rose, I ran solo and just focused on base building with hill repeats, short tempos, and chasing Strava segments for fun. During April and May, Club Northwest organized some 5-person marathon relays. I used that as a springboard to start training again for (homemade) summer time trials, with the goal to hit PRs in 5k and 10k. During this period I also started ZWIFTing (on her bike) as a supplement to running. As my coach suggested, without a real race in the calendar, too many running miles and intensity would likely contribute to burnout and injuries. I also started running with a small circle of training partners mostly on the east side where I live.

During the summer, Club Northwest organized some track races with 5 people or less per wave, and I used June-August to focus on track speed, which really paid off. I cut down my 5K PR time by 30” and road 10K PR by 10″. A metatarsal stress fracture forced me to take some time off running at the end of August and early September. However, I didn’t lose any fitness, and I would argue I probably gained some because of cycling. In August group of friends organized a 90-mile 10,000′ elevation gain ride in the core zone around Mt Rainier. I biked constantly for 4 weeks. The first week I didn’t run at all, then in subsequent weeks I added some easy short runs. 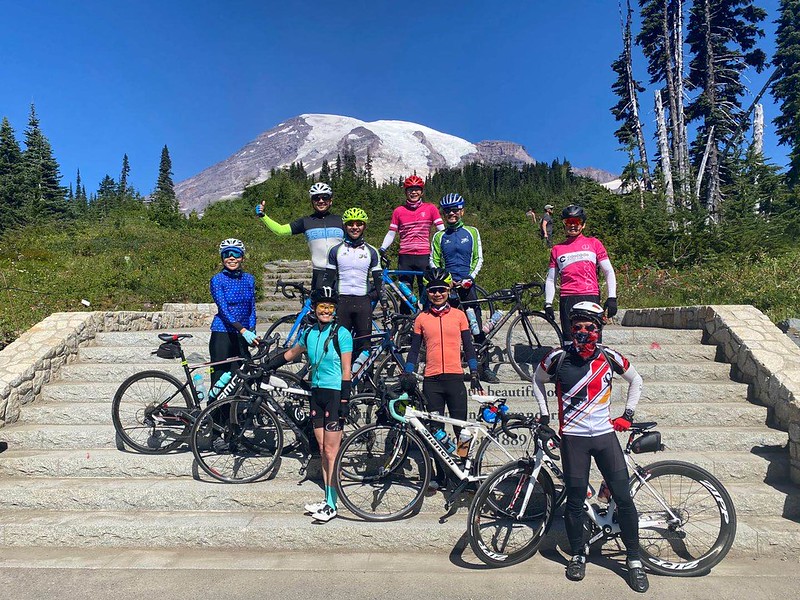 As I recovered from the injury setback, coach and I talked about the plan for the rest of the year. There was a possibility to race marathon distance projects in late December but we decided to do a time trial locally. There are a few considerations:

a. I wasn’t completely comfortable to travel to races yet.

b. It would have been a relatively short marathon build (10 weeks post injury).

c. I thought we would have better chances here locally to hit our time goal 2:35 with the help from teammates on familiar trails.

At the beginning of of October we started the marathon build, which also helped my teammates who didn’t have a goal race. I recruited Adam Schroeder, Gabi Kliot, Jordan Andersen and FuPang Xu to start our small training group. Adam and Gabi both had the same marathon time goal as me so we called it Project 2:35:

What are the next steps to earn a spot on the Chinese Olympic team?

We have started the first phase of training already, which is to build my base with short hill repeats and tempos, then likely enter a 12-week marathon-specific build. Coach and I agreed to add some miles during this build-up, or substitute with biking since I responded so well with the bike training last summer. We likely will do another half marathon time trial in February with a target of 1:15 (I ran 1:16:06 in the November time trial.) 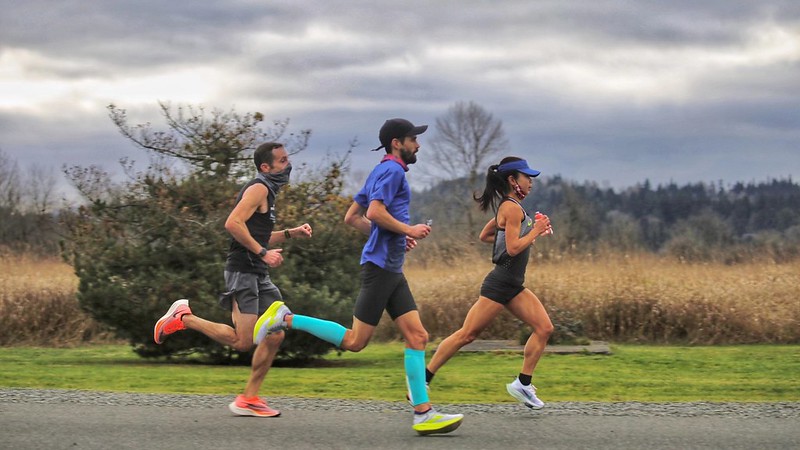 In terms of the Olympic standards, the qualification window reopened in December 1, and those who have already met the standards still count. Therefore, I don’t need to chase standards, but I will have to place top 3 among all the competitors in the trials to be selected for the Olympic team.

I’m sure the postponement of racing has been a real let-down. Talk about the role your coach Mario Fraioli has played to get you through the year.

During the first phase of pandemic we hit a little pause. I think it was necessary especially because I had some shin issues, and it would have been hard to keep top fitness for that long with no targeted races. However, his coaching philosophy is to always keep me 8-10 weeks from peak fitness. He also believes I have to run faster in shorter distances but my strength is my strength so a 30” 5k PR goes a long way and that translated into the 1:16 PR in the half. For the marathon time trial didn’t go as well as I hoped. I had cramping and nutrition issues. I skipped gels (she normally takes 4), and the pace of the first half was a little aggressive. I should have been more cautious. But, my coach thinks that once I dial in my fueling with my new added speed, I can run 2:35-2:36.

With a little help from her friends:

What role have friends and teammates played in getting you through the year?

I started running with groups in late 2017. I think group training has a huge advantage. Although solo training has its merits, I believe training with teammates has a big impact on my improvements. In previous years, Mario and I agreed to make some alterations/adjustments to be able to train with others. But, since this year most people don’t have a specific training schedule I was able to hit almost every single workout with my training group with few alterations. For the half marathon and marathon time trials, our local Chinese running club (Seattle United Runners) organized all the logistics for pacing, water stations, bike escort, timing clock, video records, you name it.

They even produced 3D printed buckles for everyone to commemorate the effort.

The day before marathon time trial, Marymoor park was very icy so volunteers even salted a few bridge junctions the night before to make the race go smoothly. Seattle Running Club’s Jarrett Kunze and Club Northwest teammates Adam Schroeder, Gabi Kliot, Jordan Andersen, Nick Welch, David Simmons, and Tyler Van Dooren all participated in pacing for either the half, full, or both. Also, Club coach Mark measured the distance for both the half and full courses, which enabled local runners to chase their goals even without races on the calendar. So, the time trial really was a big effort from several local running clubs. Everyone felt the added pressure to put on our own races, but this was perhaps the only opportunity of the year to bring the local running community together. 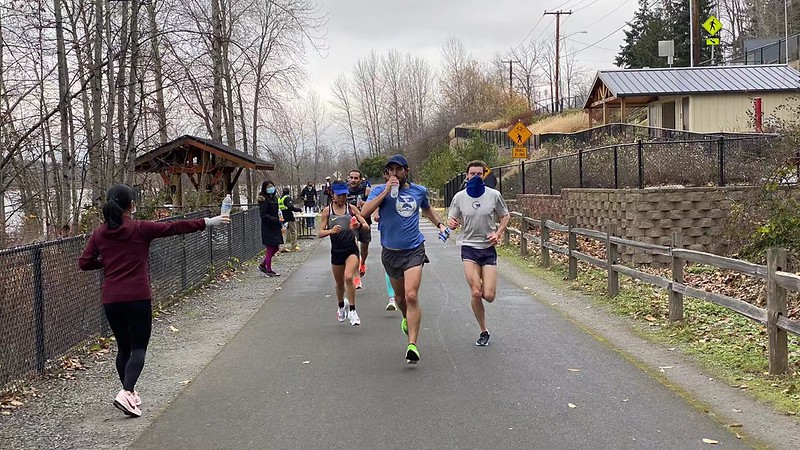 At the Chinese marathon trials I will likely be the only person without a teammate or team behind me, but I will bring all the energy we shared at the local time trials.