We are looking for ~5 travelers to join us on a 10+ day trip to Sicily that will include ~5+ days of cycling and/or walking on part of the Sicilian section of the “Sentiero Italia,” the Italy Trail.

Originally only a hiking trail, in December 2021 volunteers completed a cycling route on the Sentiero Italia. Those of us who cycle it could very well be the first Americans to give it a try.

Depending on interest, the second part of the trip is tentatively planned to explore SW Sicily and can be done on foot/public transportation or on road/gravel bikes.

The details of the trip will be decided by the group. The draft itinerary below will evolve depending on the interests of whoever joins us.

We have specifically chosen Sicily because it is highly-regarded for its wild beauty, and because it’s not a major tourist destination. The food, environment (it more closely resembles North Africa), and culture are all unique. This part of Sicily has a lot of unique archaeological sites, and was a trade route for the Greeks.

David will be cycling some/most of the trip depending on the group. Francesca will be walking/hiking all of the trip. Francesca is Italian and is coordinating details with locals including hotels and meals. She is communicating with the Italian Alpine Club (CAI) to get local help with the Sentiero.

The walking trail varies from dirt roads to rugged singletrack. Trail running shoes or lightweight hiking shoes will be fine.

Although not remote, we will need to be self-sufficient on the Sentiero.

We’ll stay in family-run, inexpensive B & Bs and hotels in scenic small towns throughout the trip.

You can make day-to-day decisions about whether to ride or hike. While on the Sentiero portion of the trip, we’ll hire a van to transport luggage and bikes as needed to the next station.

The least costly and most flexible option is probably to get a round trip airfare to either Milan Malpensa or Milan Linate, then book a separate round trip to Palermo using a regional carrier like Ryan Air.

We will coordinate land transport to Trapani/Erice from Palermo.

The first one or two days will be recovery from jet lag; cyclists will get their rental bikes; walking exploration of Trapani/Erice and vicinity.

We tentatively plan on following the first 5 sections of the Sentiero starting from Trapani. The cycling and hiking routes overlap quite a bit. Bike are not allowed on some sections of the hiking trail and take alternative routes to the next town along the route.

With a stage of about 13 km, mainly uphill and with a gain / loss in elevation of 820m / -130m, the Sentiero Italia in Mtb starts from the port of Trapani (0 m altitude) in a north-easterly direction towards Erice (altitude 700 m) From the port of Trapani, on an asphalted road, proceed towards the slopes of Monte San Giuliano, following the long Via Fardella, up to the entrance to the equipped area of ​​Martogna. Here you leave the asphalt to immerse yourself in the woods proceeding for about 2 km on dirt roads heading north to the so-called “Castellaccio di Martogna”, a small rocky lace easily recognizable by the characteristic appearance given by the mainly bare rock. From here the dirt road continues up to the summit for about 4 km in a series of curves and with some fairly sloping sections that will certainly require a few stops to take a breath and enjoy the view. Once at the top, crossing the ancient Porta Trapani and heading towards the Mother Church, you will take the path outside the ancient walls of the medieval village until you reach the CAI headquarters, a welcome point, in the Spanish quarter at about 700 m. altitude. 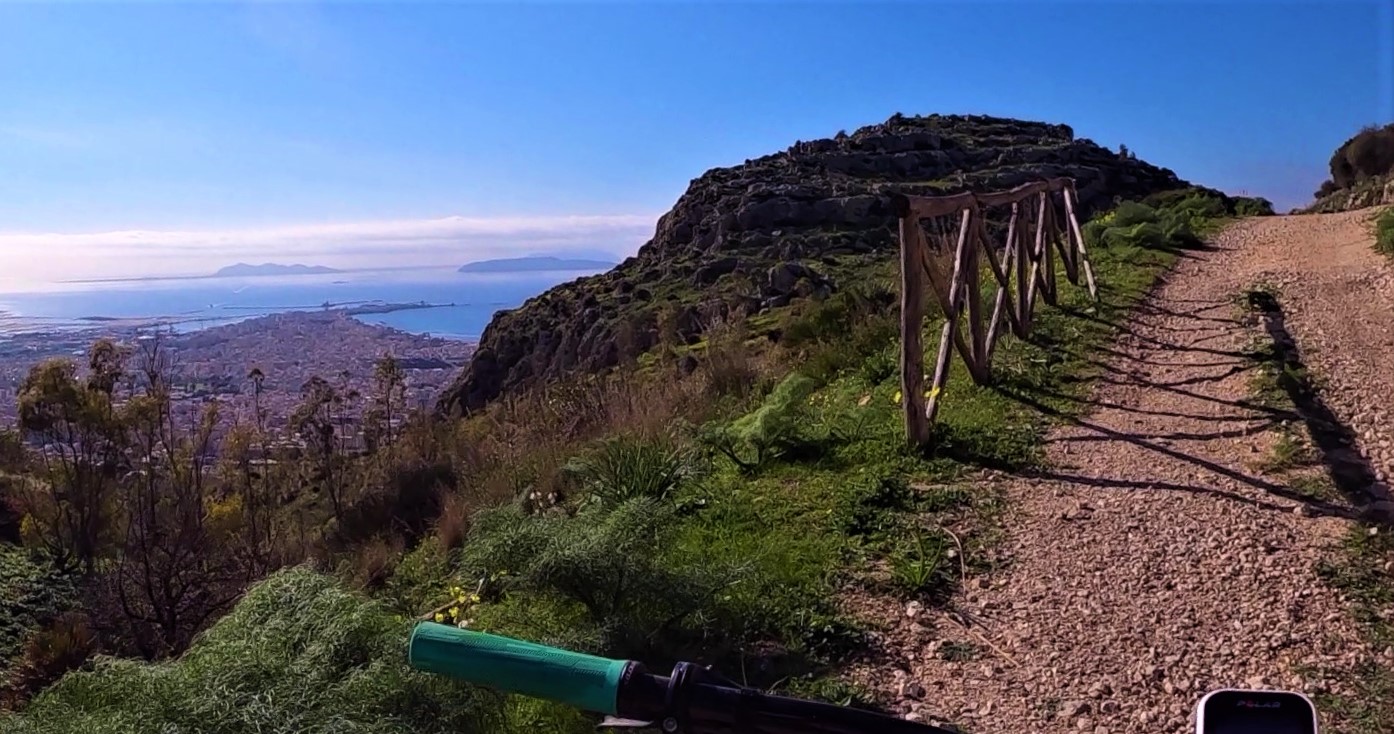 With a stage of approximately 18 km mainly downhill and with an elevation gain / loss of 290m / -800m (max gradient 22% d.-36% s, average 4% d-7% s), the Sentiero Italia in Mtb starts from Erice (700 m altitude) in a north-westerly direction towards Custonaci (170 m altitude). of rocks with some short stairways and the presence of two short sections (about 15m) to be covered on foot (OC) due to the presence of rocky steps. The entire first section, approximately 600m long, will lead to the ruins of the church of Sant’Ippolito. Here the path will continue downhill on a natural path to then join the asphalted road to be covered for about 1 km. At this point you will have to take a dirt road with a short stretch common to the SI, which will lead up to the slopes of Monte San Giuliano. Once at the base, we suggest a short visit to the nearby Tonnara di Bonagia (a few hundred meters towards Trapani) or alternatively, you can join the Sentiero Italia and take the coastal dirt road to the bay of Cornino. From here we will proceed on asphalt (provincial road 18) towards Custonaci. 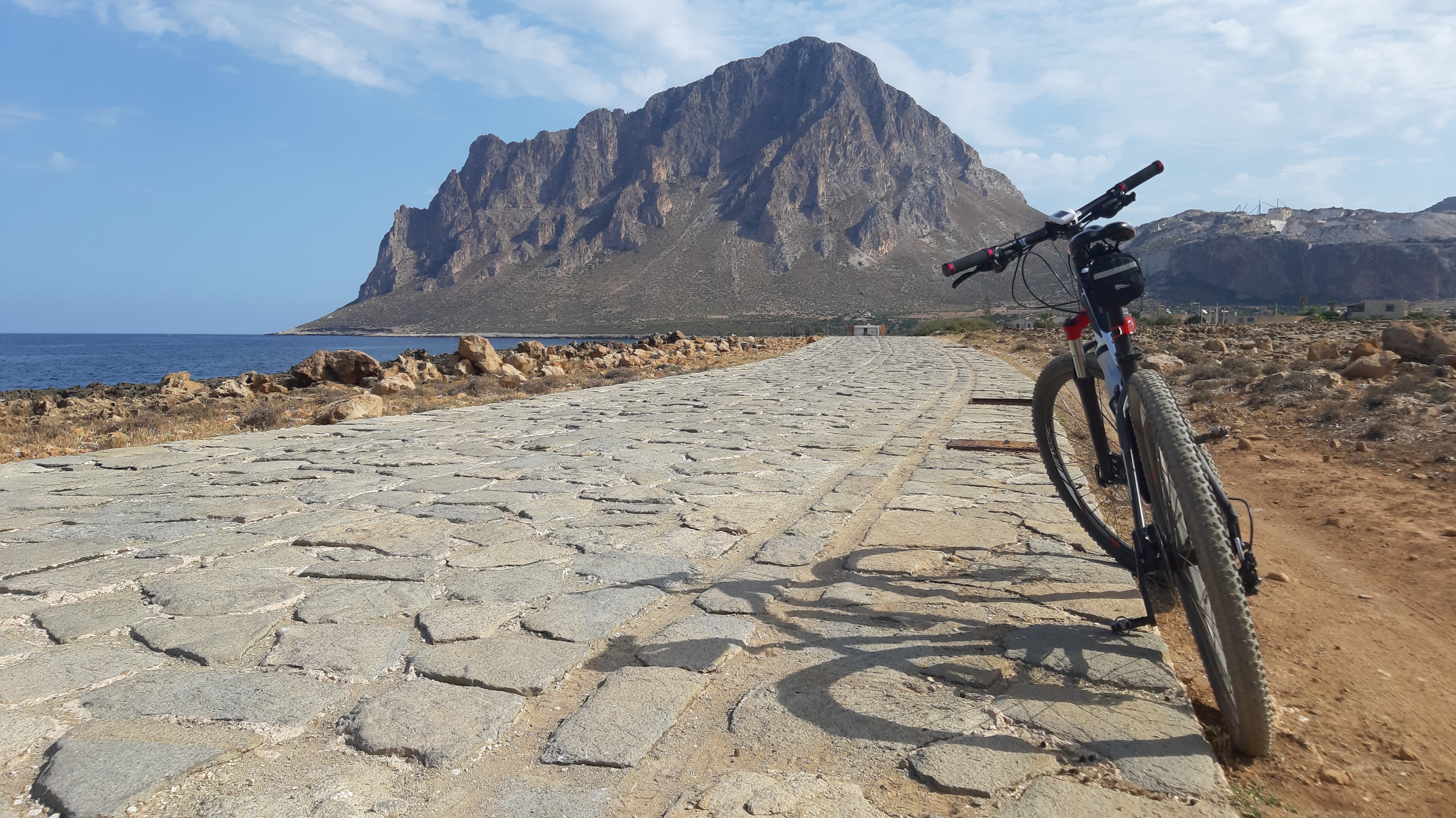 With a stage of about 15 km and with an elevation gain / loss of 270m / -380m, the Sentiero Italia in Mtb starts from Custonaci (170 m altitude) towards Macari (70 m altitude). natural path towards Scurati and then towards Mount Cofano. The route will pass in front of the Mangiapane cave, an ancient prehistoric settlement and a speleological geosite of great value. From here, heading towards the sea, you will enter the whole of the Monte Cofano Reserve to follow a natural path along the coast that extends for about 4 km, characterized by a compact but often irregular bottom with the presence of some stairways to go preferably on foot due to the dense vegetation and poor visibility (medium difficulty BC). During the journey it will be possible to stop and admire: the ancient tower of San Giovanni, a building dating back to the Bourbon period; the chapel of the Crucifix and the homonymous cave of great archaeological and paleontological interest; the “Passo della Zita” where, according to legend, a bride who fell into the sea left her wedding veil, still “visible” today thanks to the contrast created by the clear rocky bottom and the lapping of the sea waves; the tower of the Tonnara di Cofano. From here, it is advisable to take a short excursion to the archaeological site of Grotta Perciata and the path that leads to the top of Monte Cofano. From the tonnara we will proceed along a dirt road with no obstacles and a slope until we arrive in the small town of Macari. 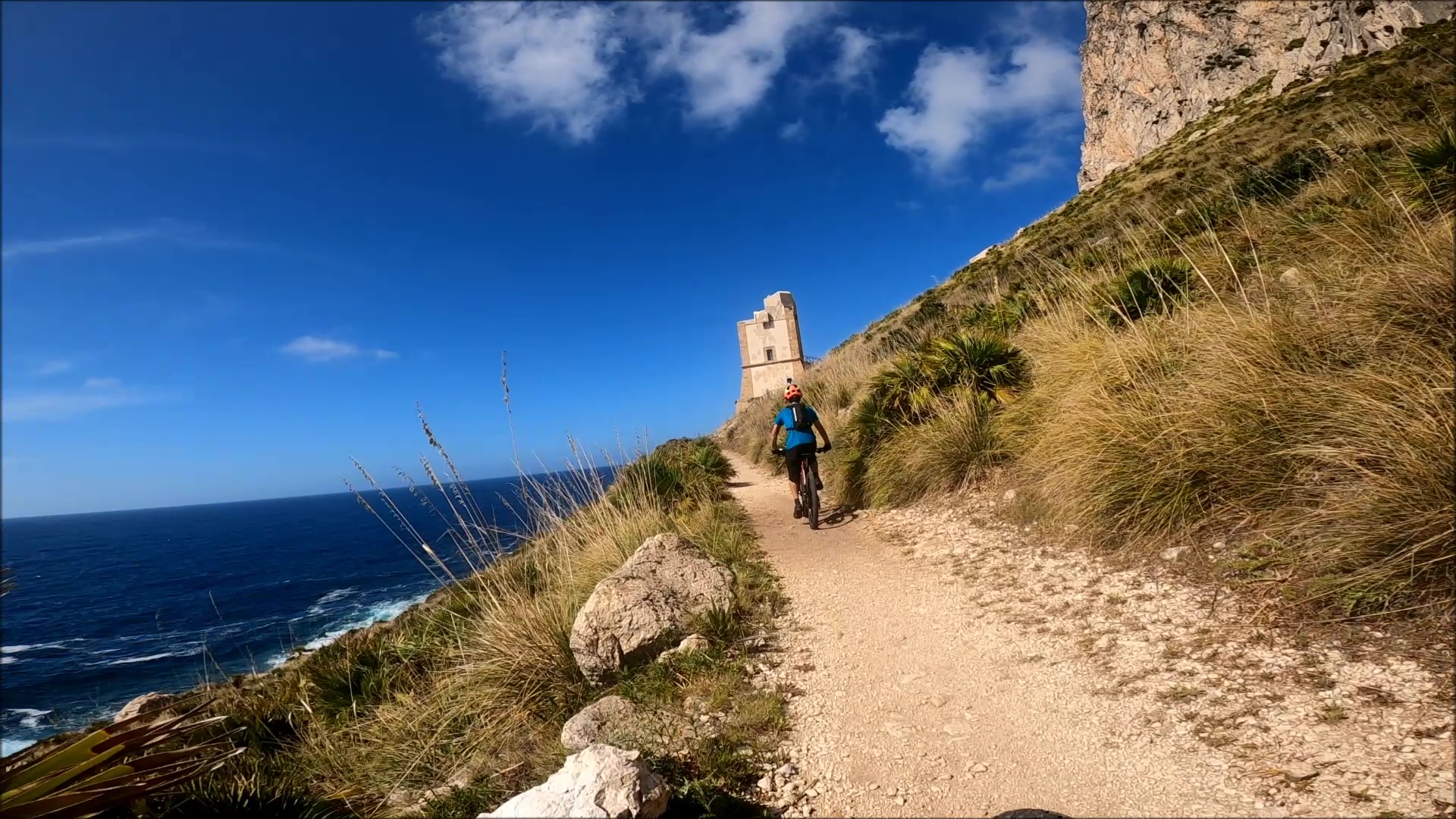 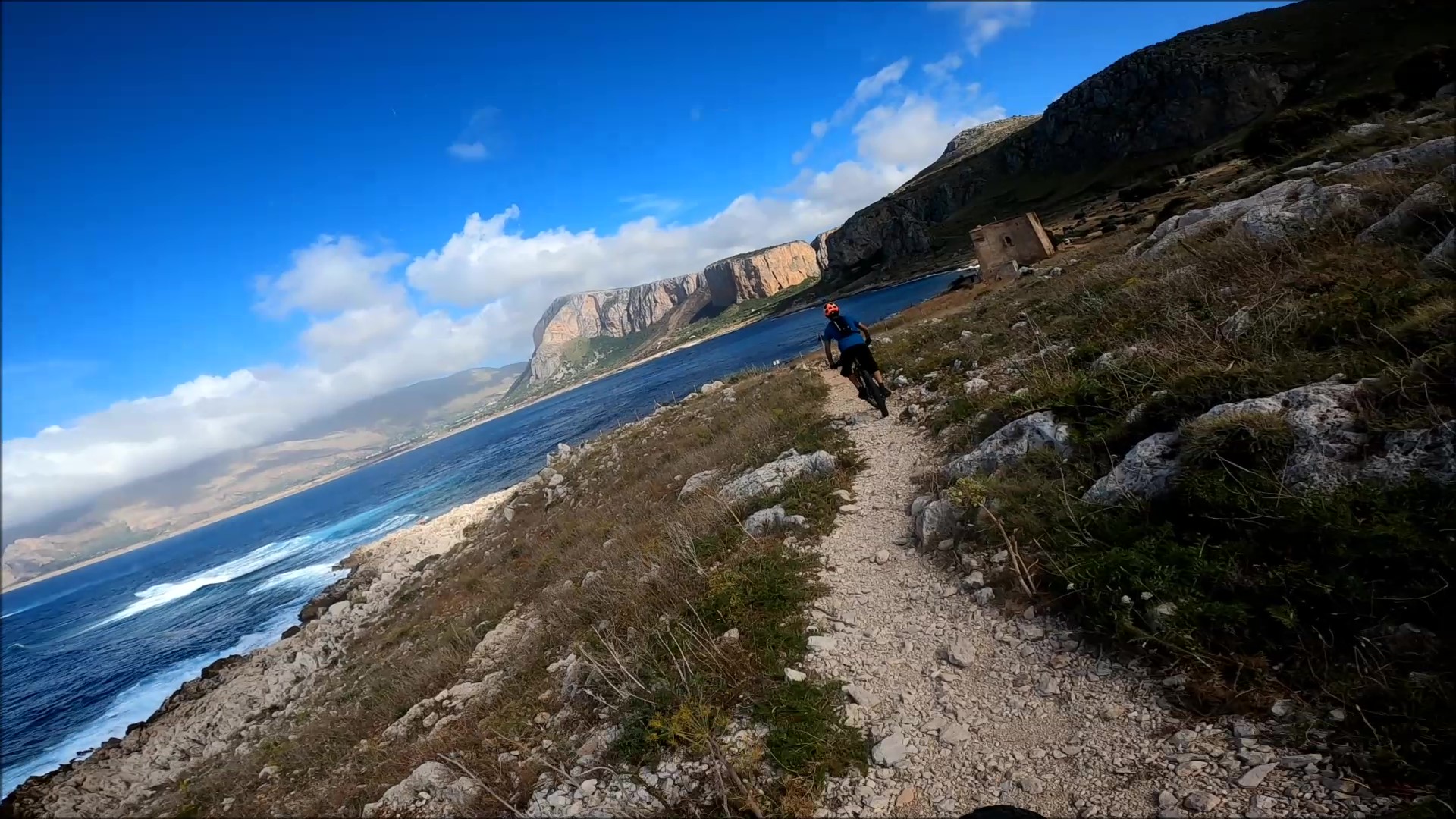 In Macari, not being able to continue for the Riserva dello Zingaro (no MTBs), take the SP 16, continuing for about 3 km. cross the hamlet of Castelluzzo (where you can refuel with water and food), continuing towards Trapani you arrive at a small slope with a series of curves, then (contrada Biro) turn left, always continuing on the paved road up to the c / from Marcato della Ficara, where the paved road ends, shortly afterwards on the left, turn to go down to Borgo Scopello via a trazzera, beware of the slightly steep descent. Once you arrive at the Borgo, you can continue to visit the Zingaro Reserve, leaving the bicycle at the guarded car park.

Leaving Borgo Scopello in the direction of Castellammare you join the SP 63 (about 1.5 km from the Borgo, there is a bar and a supermarket), always traveling along the SP, about 2.3 km, turn right (c / da piano Vignazzi), going up this road, about 4.2 km from the start you will find the Hotel Grotticelle, after another 2 km on the same road, turn left and resume the SI CAI route going in the direction of “Castello di Baida”, having reached the Castle, take the directional trazzera in the direction of Balata di Baida, following the S.I. you arrive at the center of the village, turning right you will find a bar where you can taste excellent cassatelle with ricotta (bar Caleca), continuing along via G. Laudani, about a kilometer away. you pass under an overpass, then you have to turn left, continuing along this road, you reach the hamlet of Bruca, then continue to the Agriturismo “Baglio Pocoroba” where you can stay overnight and then the next day visit the beautiful archaeological park of Segesta, then continuing on to the next stage. For folks interested in continuing by bike, it’s about 48km ride from Agriturismo “Baglio Pocoroba” to Marsala. Or the second part of the trip can be all sightseeing by foot and public transportation.

Trapani salt flats
The salt pans are particularly worth a visit and offer a truly unique landscape. You will discover this landscape in Trapani that boasts some of Europe’s oldest salt marshes and is still home to some of the windmills once used to drain water from the basins.

Favignana
Favignana is a comune including three islands of the Aegadian Islands, southern Italy. It is situated approximately 18 kilometres west of the coast of Sicily, between Trapani and Marsala, the coastal area where the Stagnone Lagoon and the international airport of Trapani, are sited.

Segesta Calatafimi
Calatafimi Segesta is in Sicily. Calatafimi, with the Castle of Eufemio and its churches, is characterised by its lanes and small streets of Arab derivation. At about 10 km from this town there is the archaeological site of Segesta, with the Greek temple and the ancient theatre, where they hold classical performances.

San Vito Lo Capo
San Vito Lo Capo is a small seaside town in northwestern Sicily, Italy. It’s known for its beach, which is on a sheltered bay overlooked by Mount Monaco. In the town center, the 15th-century Santuario di San Vito is a fortress-like structure with Arab-Norman architecture. Arab-Norman influences can also be seen in the tiny Santa Crescenzia chapel, on the main road out of town, and the circular Torrazzo watchtower.

Castellammare del Golfo
Castellammare del Golfo is an attractive seaside town on the north-western coast of Sicily, between Palermo and Trapani (not to be confused with Castellammare di Stabia in mainland Italy, near Naples). The historic little fishing port has a very picturesque location, below steep mountain slopes, with a handsome curved harbour at the foot of a small headland topped with a castle. Castellammare is just touristy enough that visitors don’t feel out of place, but it isn’t overcrowded with hotels and it has an authentic Sicilian ‘feel’.

Monreale
Monreale is a historic hill-town just outside Palermo. It’s a picturesque place most famous for the fine mosaics in the town’s great Norman cathedral. Monreale is connected to Palermo by regular city buses and is an easy short excursion from the city centre. Although it only takes a couple of hours to visit and see Monreale from Palermo, there are places to eat and drink, good views and a pleasant atmosphere, so some visitors choose to extend their stay.

Palermo
Palermo is the capital of the Italian island of Sicily. The 12th-century Palermo Cathedral houses royal tombs, while the huge neoclassical Teatro Massimo is known for opera performances. Also in the center are the Palazzo dei Normanni, a royal palace started in the 9th century, and the Cappella Palatina, with Byzantine mosaics. Busy markets include the central Ballarò street market and the Vucciria, near the port.

Castelvetrano
There’so much history, beauty and culture in Castelvetrano, a small town near Trapani

To fully appreciate the uniqueness of this town of over 30,000 inhabitants, let’s enter the old town which still retains a certain aristocratic character due to its early history, related to the Tagliavia family, the ancient lords of the city; we can feel an atmosphere of never fallen nobility.